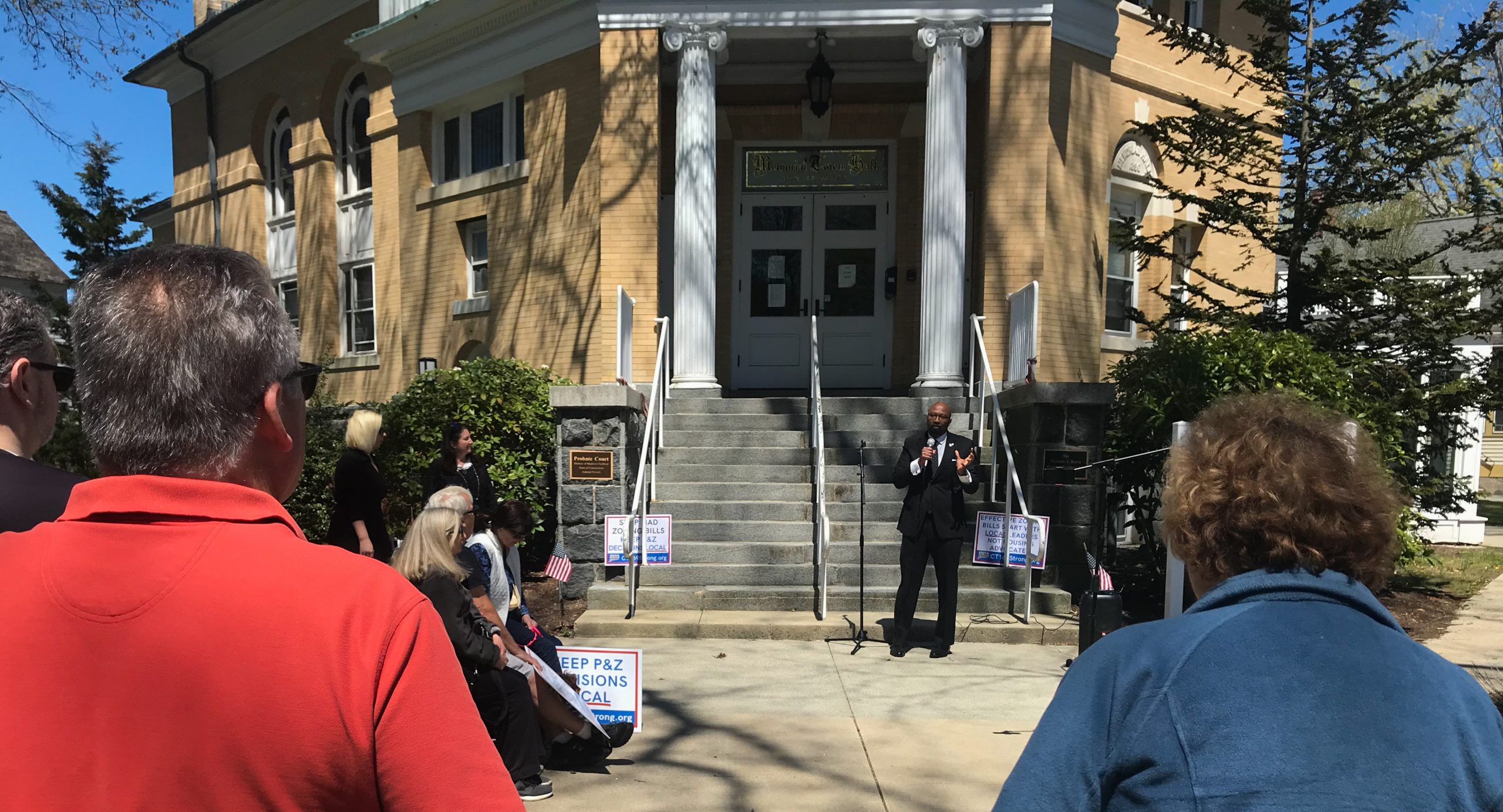 MADISON — In front of Town Hall Saturday, about 45 people, including local and state legislators and members of CT169Strong, rallied against several proposed housing and zoning bills that they said will transfer local control to Hartford.

“The issues that really resonate in Madison are local control — we’re a very engaged community here, people come out and they have opinions. We are really good at problem solving in a way that works for Madison, so I can’t support anything that takes local control away from us,” said Madison Selectman Bruce Wilson, who was among the speakers at the rally.

Among the target legislation was H.B. 6611, known as the “Fair Share Zoning” bill, which is sponsored by the Open Communities Alliance. The bill provides a new formula for calculating the percentage of affordable housing that each town is required to provide as part of the need in each of the Council of Governments regions.

The bill contains language that would allow an “aggrieved party,” to sue a town if it is not in compliance with the legislation, which Wilson said is untenable for small communities like Madison.

“We don’t have a lot of resources. We have a relatively small town budget and the prospect of our P&Z having to consult with an attorney on virtually every decision they consider and then have that attorney on retainer for the inevitable lawsuit could have a real financial impact on a town like Madison, and if the town were to lose it would have to pay the expenses of that lawsuit.”

Wilson warned that waiting until legislation is approved will be too late.

“You have to be talking to your neighbors. They have to get educated, they have to get engaged and together we can send a message to our elected representatives and to Hartford collectively that we’re willing to work but just handing down this punishment is not going to work for us as a community.”

Sen. Tony Hwang, R-Fairfield, who spoke to the crowd, said that under H.B. 6611, if a town doesn’t meet its “fair share” requirement, it will be under a consent decree that will be managed by the court system.

“It’s not [managed by] your local municipality, but your zoning would be mandated and regulated by a court system. It’s state takeover of local control,” he said.

Hwang said there were about 12 zoning bills across four committees, known as the “dirty dozen” by CT169Strong, and that towns needed to be vigilant.

Some of the bills include H.B. 6107, which would restructure elements of the Zoning Enabling Act and provide and state-appointed administrative group that would promote compliance with municipal affordable housing plans.

Other bills, including S.B. 804, S.B. 1024, H.B. 6570, and H.B. 6613, would create laws that would allow as-of-right development in towns for accessory dwelling units and would discontinue public hearings after a town had decided what would be allowed as-of-right in its regulations.

In addition, H.B. 6570 would provide a study of state- and municipal-owned parking lots and land within ½ mile of transit stations as potential sites for affordable housing.

Hwang said the Planning and Development Committee also passed two placeholder bills — S.B. 1066 and H.B. 6638 — that can be used as a blank slate without a proper public hearing.

“In Planning and Development Committee we passed two dummy bills. The language could be passed in the dark of night — but they could easily take another bill, unrelated, and insert all of this language in there,” he said. “It’s important for all of you to have a voice. This is not a Democratic or Republican issue, this is about state takeover of municipal rights, and ultimately, it is an invasion of people’s personal property rights.”

Rep. Kimberly Fiorello, R-Greenwich, told the crowd that ultimately these bills seek to reduce the number of public hearings that go through a zoning commission.

“Public hearings are not just for ‘NIMBY’ers.’ Public hearings are where so many valid pieces of information come out about every nook and cranny of these neighborhoods, to protect public safety, to protect our environment. They are one of the most valuable resources that a lot of our planning and zoning folks have.”

Steve Mullins, who is a member of the Planning and Zoning Commission in West Haven, encouraged residents to contact their representatives to oppose the legislation.

“You’re here because of your rights and your freedoms that so many of our forefathers fought and died for. Hartford is doing everything they can to take away from us and we are going to stand here and collectively say no. We are 169 strong, independent, self-governing municipalities that know our communities better than anyone.”

State Rep. Mike France, R-Ledyard, said it was ironic that the Connecticut legislature passed Home Rule Act more than 60 years ago, which gave authority to the towns to write their own charters, and now was reversing its position.

“Now here we are 60 years later turning back the clock because they don’t like how the cities are being run and they think they can take what isn’t working in our cities and bring it to our small and medium sized towns and dictate to us what we do best. That is not the solution that we need.”

France said state control was a continuation of a pattern that he saw last year when the legislature proposed regionalization of the schools.

After the speakers finished, Max Baldwin, a resident of Durham, said he saw a pattern of removing local control at both the state and federal levels.

Gerald Birnbaum, who said he is a “75-year-old Madison native,” called the state’s removal of local zoning control “just horrible.”

“Madison is a spectacular town. South of Route 1 it’s been pretty much the same for 100 years and with these issues coming up at the state level, I could see it being changed and it will look much like any other town, nothing special will be in Madison.”