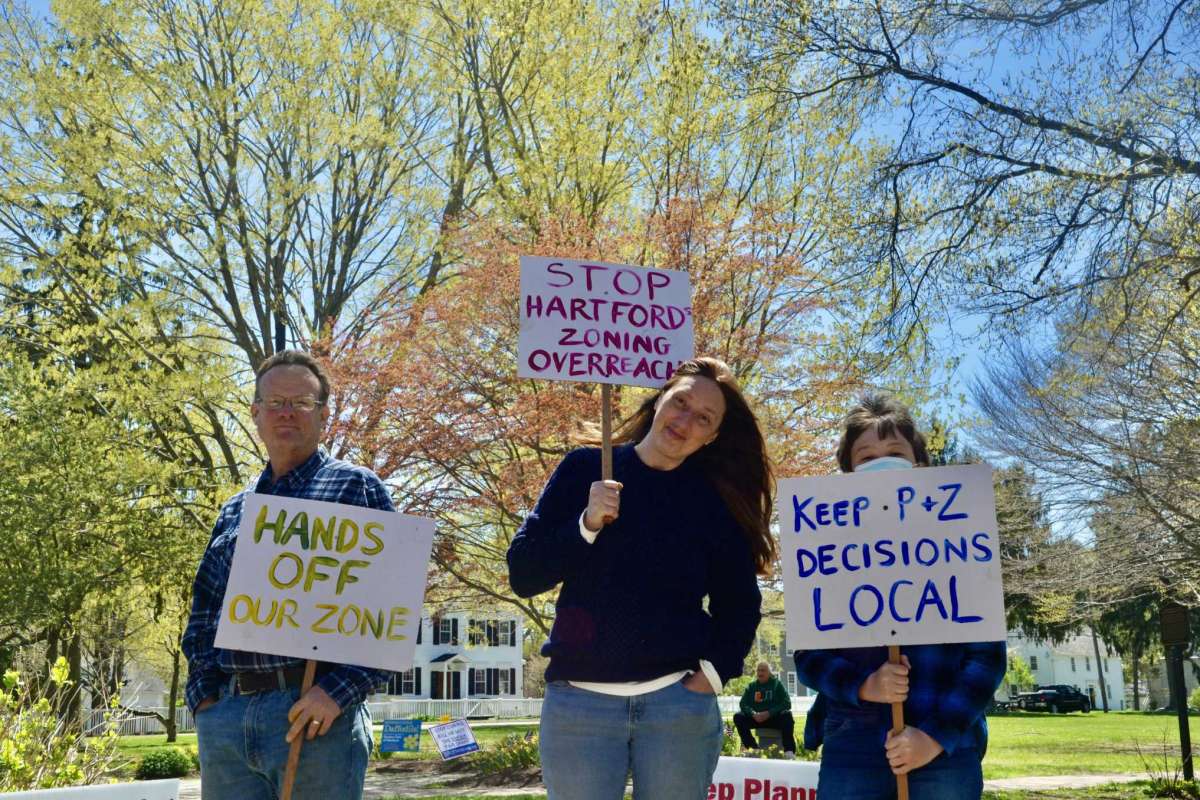 MADISON — The message of the rally on Saturday was shared in words and signs: Hartford, keep your hands off local zoning.

Some 60 people, including local and state Republican officials, gathered in front of Memorial Town Hall to express opposition to proposed state legislation that organizers said would take away local zoning.

With microphone in hand, Madison Selectman Bruce Wilson, a Republican, implored residents to learn about these bills and hold elected officials accountable.

“This is nothing short of Hartford saying to Madison, ‘You don’t know what’s right for your town, you don’t know how to do it. We’re going to take this away from you and tell you what’s best for you,’” Wilson told those gathered at the rally .

The attendees carried printed placards that said, “Keep P&Z decisions local.” The rally was organized by CT 169 Strong, a coalition that has held similar rallies in West Haven, East Haven and Fairfield, to date.

The proposed bills in the state House and Senate call for changes to local zoning, some would override local zoning laws and mandate the construction of multi-family and affordable housing.

The proposals include mandating where and what type of multi-family housing and accessory apartments are built, and mandating what towns take into account when determining whether to approve a housing project. In some cases, public hearings would be eliminated.

Former Republican state lawmaker Noreen Kokoruda of Madison, who attended the rally, noted her concerns about bills that she said would enable mobile homes to be treated as single family residences; another suggesting adding a 1 percent state property tax to communities that do not meet certain criteria for affordable housing; and one that would allow an individual without standing to sue over the issue of affordable housing and diversity in any town.

“While Hartford is only 40 miles away — sometimes I think they’re 500 miles away,” Wilson told those assembled.

“We need to be educated, we need to be engaged and stand up and have a voice, “ he said. “To wait till this goes through and then protest it and say it’s wrong — is too late.”

Wilson said, “I know this community and I know all of you, and I know that together we can do the right thing to increase the diversity of our housing.”

West Haven Planning and Zoning Commissioner Steven Mullins at one point joked with the group who gatheredsaying, “I bet you didn’t get up this morning, and think about zoning.”

But Mullin had a message, which he imparted in West Haven at a similar rally two weeks ago.

“We are 169 strong, self-governing municipalities that know our community better than anyone,” Mullin said, and urged attendees to stand up and be heard. “Continue to rally by calling, texting, emailing, Facebook messaging, Facebook walling — your state representatives and your state senators and tell them, ‘No.’”

Before the rally, local Republicans talked about what they objected to in the bills.

Amy Stefanowski, chairman of the Republican Town Committee, said she is worried that Madison officials and town residents would lose their voices in zoning decisions.

“We will not be able to have the spirited conversations that we love to have around what happens in our town,” she said.

Stefanowski noted the local work being done, such as the affordable housing commission and allowing accessory apartments.

Wilson said Madison residents are engaged in their local zoning issues, citing the new flood plain ordinance, The Ledges proposed development and General’s Residence project and ongoing discussions about what to do with Academy School and Island Avenue School.

“People get involved on important community issues,” he said. “We are not disengaged from what’s going on as a community and I think, together as a community, we have the capacity and the resources to come up with good, thoughtful plans for the future of Madison.”

Stefanowski and Wilson both noted housing is an important discussion, but said they believe it is one that should remain on the local level.

Kokoruda, the 10-year former GOP state representative for the 101st district, who lost her seat to Democrat John Michael Parker in 2020,

said she wanted to campaign on this issue but was told that it would be resorting to “scare tactics.”

“Some of these bills are so over the top,” Kokoruda said.

“Some of bills have good things,” she said. “Can we do more? Yes.” She added, “We do want more affordable housing.”