Use this easy form to reach out to your town leaders. Engage them in this fight

Zoning is on the Ballot in November!

The zoning bill HB6107 hollowed out the existing protections for historical by eliminating the consideration of “character” – which truly honored the uniqueness of every one of our 169 towns in CT. HB6107 removed considerations for maintaining property values and considerations for the over densifying environmentally sensitive areas of communities. In the last two years we have seen the onslaught of predatory development with developers tearing down naturally occurring modest single family homes in more affordable neighborhoods to develop RENTALS ONLY units. (Will not create generational wealth.)

The handful of Democrat State Reps in Green that voted NO were from highly competitive election races. We had a CT169Strong supporter receive an email from one Democrat legislator who stated they have to hear from their party leadership when they have permission to vote no on any proposal! We also know of at least one Democrat legislator in YELLOW (absent and not voting) that was onsite during the vote, but “took a walk” while the vote was happening, so she would not be on record as voting on the bill either way. Absolute power corrupts absolutely. Bring checks and balances back to the State House, 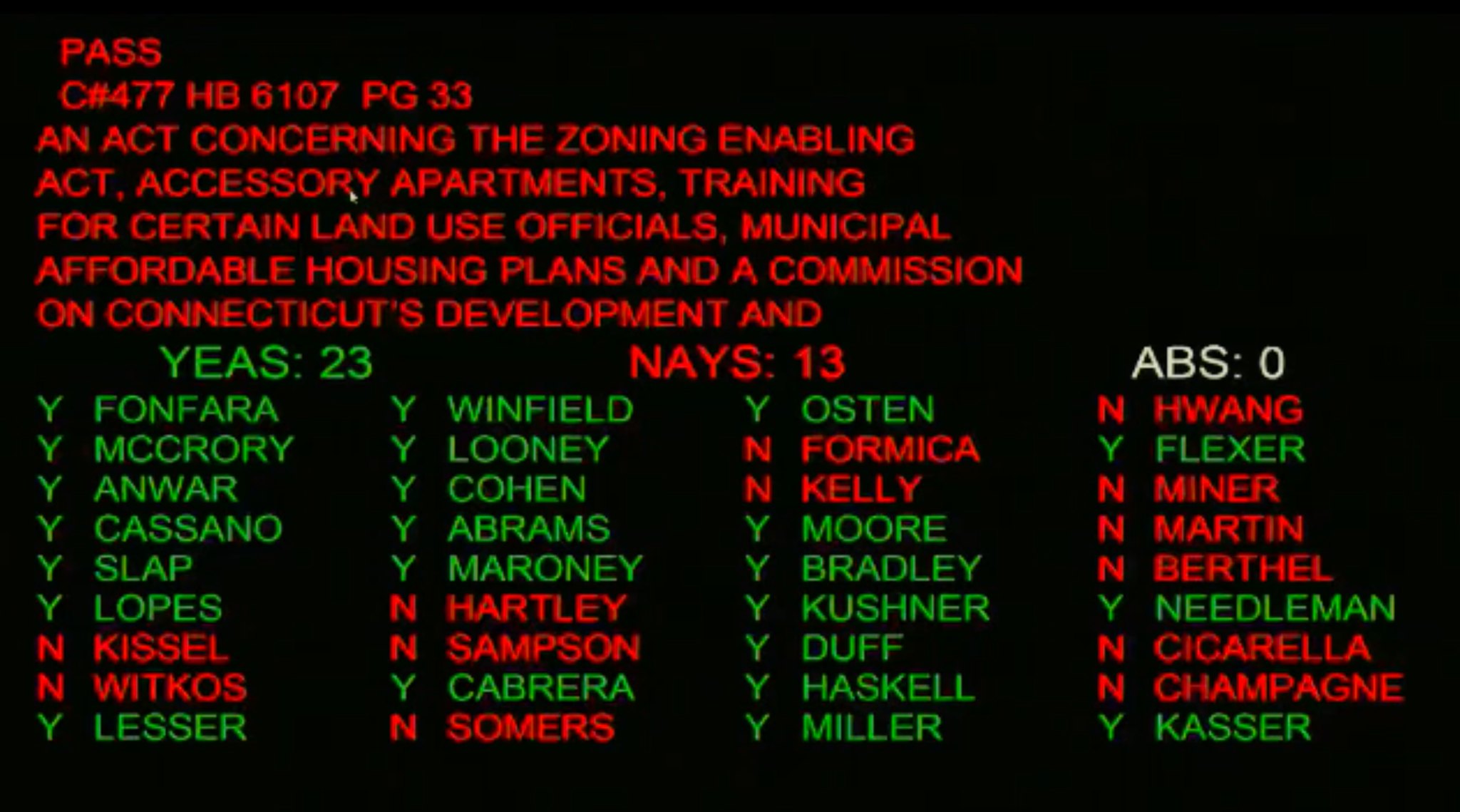 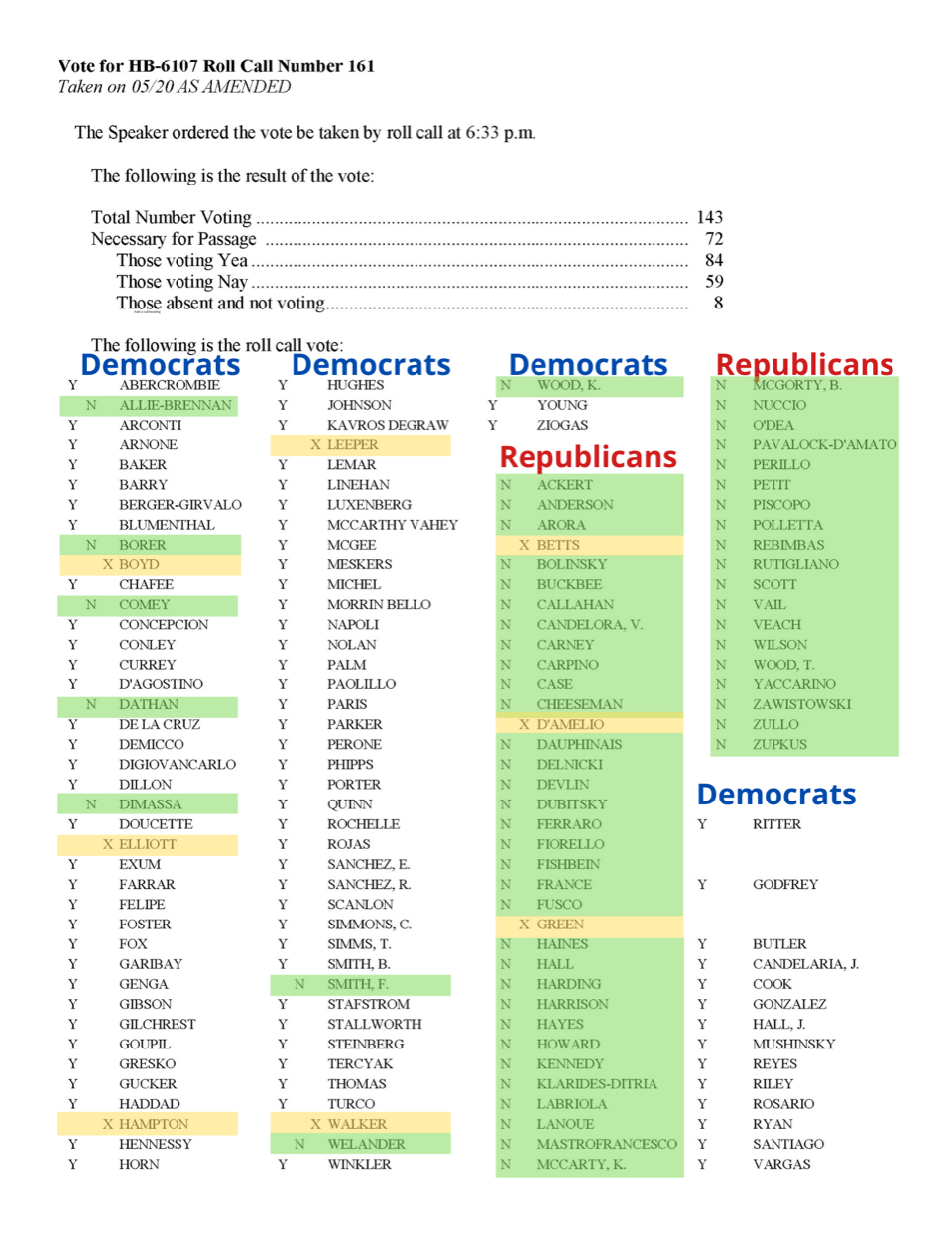 READ THE DESEGREGATECT BILL HB5429
AND OUR CONCERNS

It does begin to take away local decision making, it is a foot in the door.
*
It does not address the shortcomings of 8-30g.
*
It does not have adequate representation from P&Z and Housing Authority leaders from municipalities statewide of all different sizes. 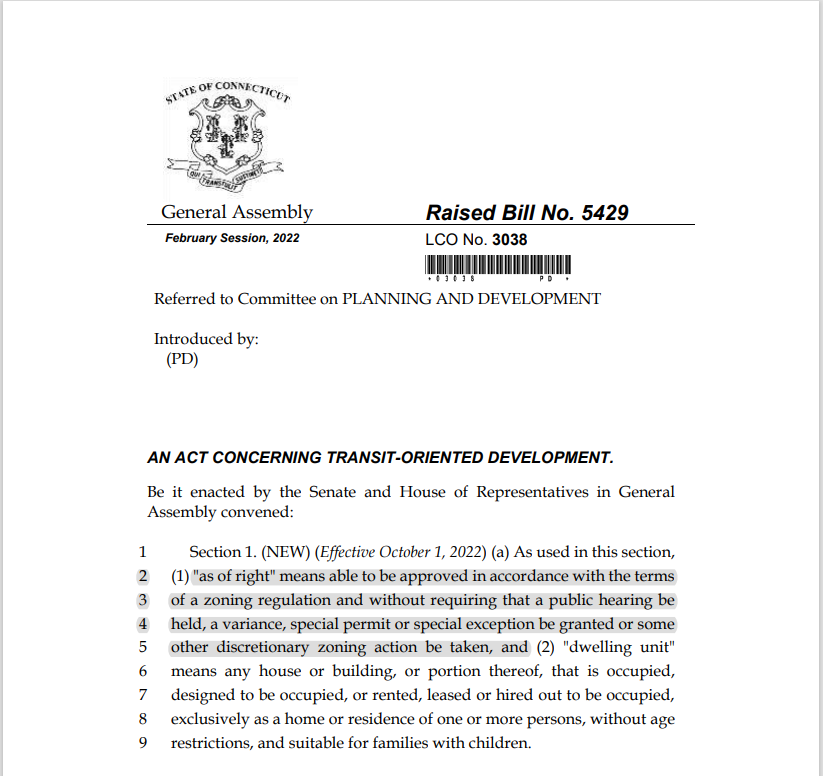 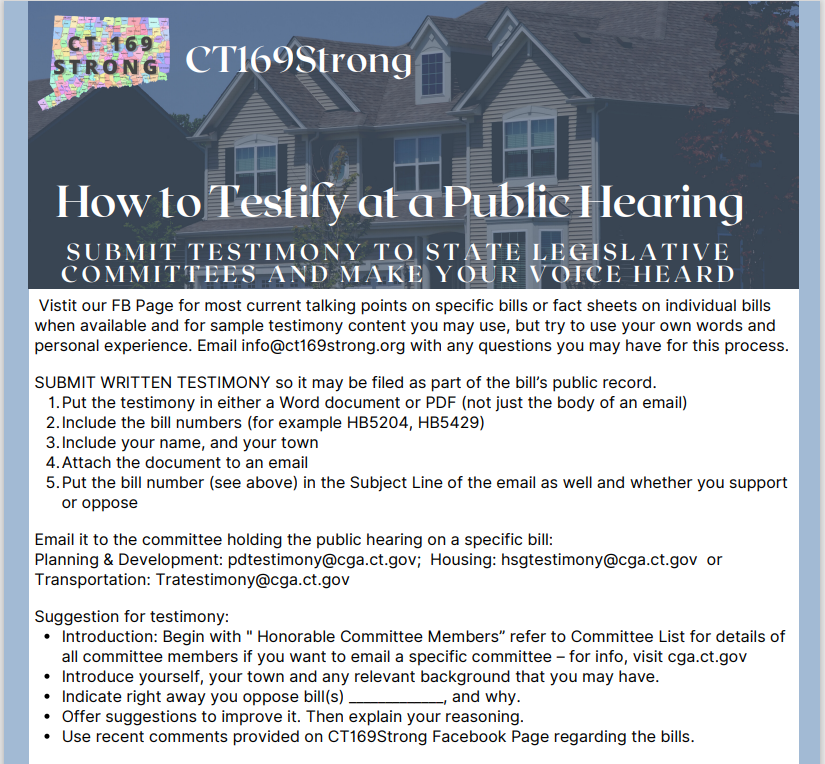 How to Submit Testimony 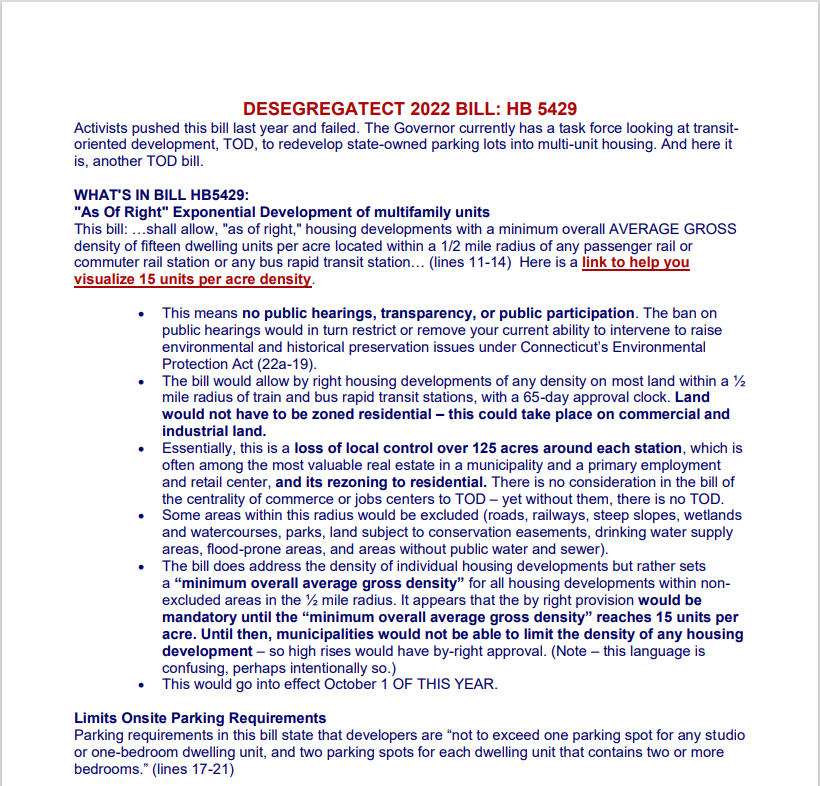 Why would we trust Hartford politicians and bureaucrats to care more about our town and city’s people, traffic, environment, and future, than we do ourselves?

Who decided that our local decision making wasn’t good enough? Why would local municipalities trust the state legislature or the largest cities in Connecticut when they have mismanaged the state for decades.

How can they look into hearts of residents and condemn us all as racists, which is one of the most egregious accusations to make against a person?

WE MUST MAINTAIN OUR DECISION RIGHTS OVER LOCAL LAND USE AND ZONING IN OUR TOWNS AND CITIES. ​

WE TRUST OURSELVES AND OUR NEIGHBORS TO CONTINUE TO EXERCISE LOCAL INTEGRITY.

OUR RIGHTS ARE IN JEOPARDY

Hartford politicians and bureaucrats are actively pursing a takeover of the local land use and zoning rights of our 169 towns and cities. See what your neighbors are writing. We need your letters too!

Very soon, the General Assembly’s Housing Committee will consider a bill, HB 5204, known as the “Fair Share” bill.  The bill’s language is vague on how it would actually work,[…]

Letter: RTM Resolution Would Send a Message to State Legislators about 8-30g

By: greenwichfreepress | March 8, 2022 Submitted by Ellen Brennan-Galvin, RTM D-7, Vice-Chair, Land Use Committee CT Statute 8-30g, which was initially adopted in 1989, did not achieve what it[…] 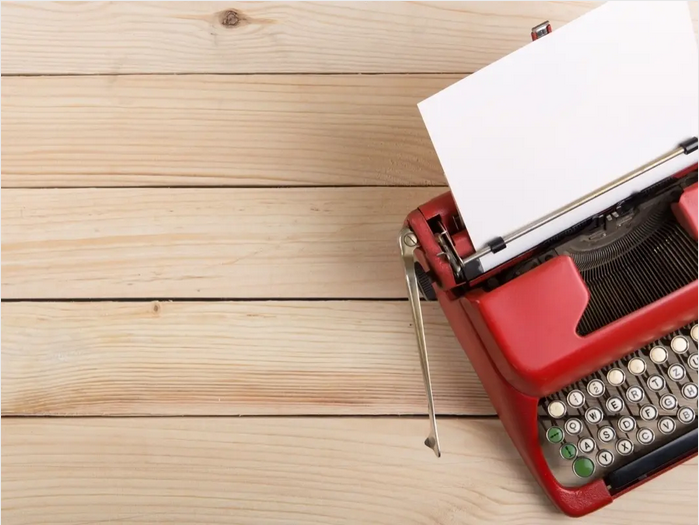 Letter: Save Your Local Zoning Commission

“I call on all residents of our state to save our local land use boards and commissions —​ help us to help you,” Alexis Harrison writes. Anna Bybee-Schier, Patch Staff[…]

By: greenwichfreepress | February 14, 2022 Submitted by Frederick Lee, Greenwich, District 1. Much has been written regarding 8-30g and its impact on Greenwich. I would like to express my[…]