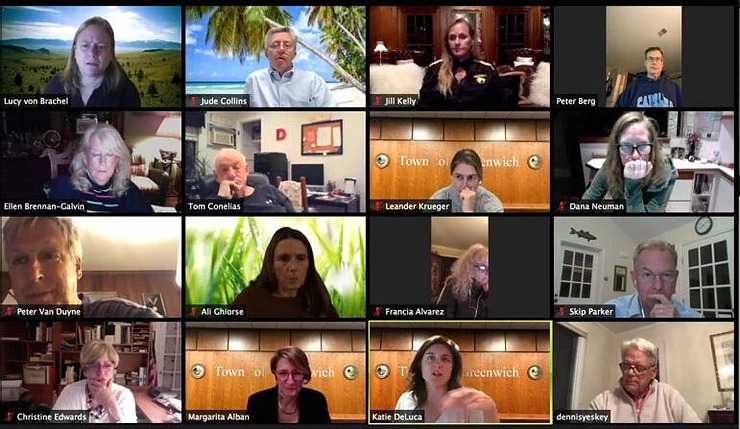 On Monday, P&Z representatives gave a presentation to the RTM Land Use committee about statewide efforts to increase affordable housing in Connecticut. P&Z director Katie DeLuca said Greenwich’s moratorium on its section 6-110 statute to incentivize moderate income (workforce) housing was in response to a public outcry about the size and bulk of proposed buildings, as well as the loss of community character.

That is distinct from the State’s 8-30g statute to incentivize affordable housing.

The 8-30g statute, passed about 30 years ago, mandates that all towns maintain a minimum of 10% of their housing qualify as “affordable.” Currently, only about 5% of Greenwich’s housing is affordable, so 8-30g remains an avenue for predatory developers.

RTM Land Use committee chair Peter Berg acknowledged there is a shortfall of affordable housing.

He noted that the Greenwich United Way recently reported that 29% of Greenwich households fall into the ALICE (Asset Limited, Income Constrained, Employed) category – and that was before Covid.

Alban talked about consequences of Greenwich falling short of the required 10%.

(Last November P&Z announced a settlement with a Milbank Ave developer whose application for a multi-unit apartment building to replace a row of turn-of-century houses was denied. The developer had hinted he might re-submit under 8-30g. It went to court and the settlement was for 30 units).

Ms Alban said beyond 8-30g, new threats have emerged at the State level.

“It is the opinion of the Federation that this proposed legislation removes the authority of a local land use agency to preserve what is known as the single-family neighborhood…. The proposed bill requests significant changes to how zoning authority is exercised in Connecticut and continues the uncomfortable trend of transferring power from local government and concentrating it at the state level.” – CT Federation of Planning & Zoning Agencies Quarterly Newsletter, Fall 2020

She said two-acre and four-acre zoning would become illegal and multi-family housing would be allowed throughout communities.

Second, Alban said there is a lawsuit against the town of Woodbridge, CT, that claims single-family zoning is illegal.

She said the issue of single family zoning could work its way up to the Supreme Court.

“They are looking for two, four, six-family homes throughout towns,” Alban said. “They would make single-family illegal. At the end of the day, the impact on Greenwich could be tremendous.”

Alban said the threats are real, and that single-family zoning has already been eliminated in the state of Oregon, parts of California, and in Minneapolis.

Commissioner Dave Hardman said the ability of the national and state movements to require infrastructure be added to the town was a potential “hit to the Town’s finances.”

“This movement to deny using ‘community character’ is also very discomforting and disruptive,” he continued, adding that there are two ways for Greenwich to retain local control. One is for the Town to achieve the 10% affordable housing goal. The Town has roughly 26,000 housing units.

The second is to quality for a five-year moratorium, for which the process includes accruing points for housing unit equivalents, rather than building entirely new units.

“We’re talking about hundreds of additional units to satisfy even the moratorium,” Hardman explained. “We’re working with Greenwich’s housing authority to try to qualify more of their units (as affordable).”

He said that under 8-30g, units built before 1990 do not qualify toward the count of affordable units.

However, he said, if some of the older units were rehabilitated, they could count toward the 10%. “This notion of being unprotected is not a comforting one to us,” he added.

Commissioner Dennis Yeskey said most of the Town’s affordable units fall under the purview of the Housing Authority.

He said the Housing Authority has major financial constraints against building new units, but could potentially provide sites for development or renovate units in collaboration with the Town or private donors to build points toward earning a moratorium.

Yeskey said the challenge was how to fund the projects, and it might be worth the Town considering taking on debt or creating tax rebates. “Achieving the 10% (affordable units), short-term, is probably too expensive but achieving the moratorium in the medium-term, a couple of years down the line, is a lot more realistic,” he said.

Land Use committee member Lucy von Brachel said she didn’t have an issue with some density, but Greenwich’s existing dense neighborhoods continue to absorb new developments, which adds to density and contributes to the very segregation that DeSegregate CT is pushing back against.

“Are we making space to spread out units across town?” she asked. Ms. Alban said she wished more residents knew they can create an affordable apartment in their house without going to the commission for approval. They can instead with staff for administrative approval.

“That spreads affordable and senior living throughout the town,” Alban said. “Initially we didn’t allow it in (the R6 zone) because it already has two-family as of right. But DeSegratate CT also wants to reduce parking requirements, which we’re concerned about when we think of it in a neighborhood like Byram because there’s already not enough space to park.”

“One of the things we’d like to do is put very small scale developments across town, where they become invisible and blend into the fabric of the town without changing its character,” Alban said.

ZBA chair Pat KirkPatrick said affordable units are vital for many people to stay in town, including divorcées or young people out of college looking to get their start. Alban said the new regulation about affordable units in homes can be as big as 1,200 sq ft, which would suit the needs of, say a divorced mother with children.

Alban said DeSegretage CT’s model was “urban,” and she wondered what would happen to rural areas, farmland, open space, and environmental preservation. “It’s all geared to creating small lots,” she said.

Alban said the movement represented by DeSegreatgate CT is not unique to Connecticut, but rather part of a national movement, and the fight is against having a heavy concentration of minority population in limited parts of the state. “That’s what they’re fighting.”

Alban said that for Greenwich to move out of this it is going to have to find money to support affordable housing that is consistent with what our town looks like. She said that might involve funding the housing authority, recently renamed “Greenwich Communities,” which the Town has not done before.

Currently Quarry Knoll has 50 units on 7 acres, and is considered underdeveloped.

(The Housing Authority seeks to replace Quarry Knoll’s existing 50 units for seniors age 62+, with 175 to 225 units, including a mix of elderly, affordable, and market-rate units across 5 different buildings.)

“What can we do to make Greenwich adapt so these threats aren’t always around us?” Alban asked. Land Use committee member Christine Edwards pointed out that many residents rent out rooms to boarders to make it possible to continue to afford to live in Town. She suggested that incidents were examples of affordable housing that might be counted at the State level.

Alban said those situations could not be counted. “It’s not deed restricted. It isn’t in set-aside developments, etc,” she said. In the past, the commission has considered whether the housing provided to teachers by private schools and employees of country clubs might be counted toward the 10% but learned that was not possible for the same reason.

DeLuca said there was opposition across the state to the major land use and zoning reform initiatives.

Land Use committee member Frederick Lee said it didn’t seem fair to compare Greenwich, with a median income well over $100,000, to the entire State. “They’re trying to equalize,” Lee said. “Greenwich is a target.”

“We have to come up with different ways to subsidize the unit that doesn’t end up in massive amounts of housing units for the community,” DeLuca said.

Hardman said it might be appealing for the town to put in 5-10% of total capital, but should get some return. This could be a feasible investment for the town,” he said. Mike Warner asked it might make sense to take units too old to qualify for an affordable designation, and renovate them with incentives to developers.

“Absolutely, yes,” Hardman said. “We should have strategies. We should have plans,” Alban said. Warner said the town should work with elected representatives. Ms. Alban said they had been briefed, and the issue had come up in one of the debates.

“We’re trying hard to influence the outcome,” she said.