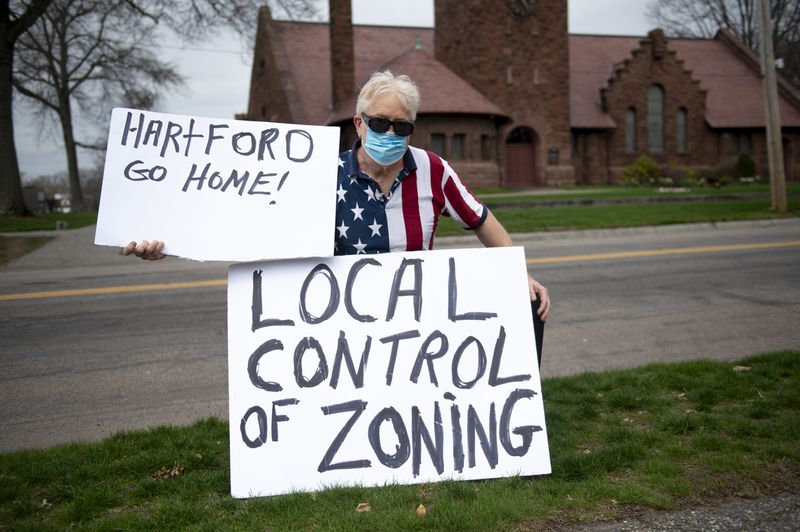 “Everybody’s just up in arms that Hartford wants to come in and decide what’s best for our town. You’ve got to keep planning and zoning local,” said Sue Prescott, 65, of Fairfield, wearing a face mask that read “CT 169,” a nod to the #CT169Strong movement, which opposes the bills and advocates for local oversight of zoning decisions.

Addressing a crowd of about 75 assembled outside Fairfield’s 18th century Old Town Hall, state Sen. Tony Hwang, R-Fairfield, argued that there is “no doubt” that Connecticut needs more affordable housing, but he admonished majority-Democratic leadership in the General Assembly for attempting to institute solutions led by the state, rather than by local municipalities.

“I’m not saying that we should stay with the status quo,” Hwang said. “I’m simply saying that the solution being offered right now by Hartford is a one-size-fits-all that takes away and disrespects the personal property rights of owners and residents of every community in the state of Connecticut.”

Advocates of the proposed legislation argue that restrictive zoning rules, which control population density and limit certain types of development in towns, have created a state divided on racial and socioeconomic lines, where small, predominantly white suburbs are bastions of wealth and inaccessible to many residents.

Among the solutions, advocates say, are a series of bills including Senate Bill 1024, which proposes stripping towns of the ability to simply cite “character” as a reason to exclude certain types of development, and House Bill 6611, which would require every town in the state to host a portion of affordable housing, rather than concentrating affordable housing in a few municipalities.

“I know a lot of people think that this is ‘not my backyard’ kind of opposition to this,” she said. “But it is not. It’s just simply saying that we want control over our own communities.”

Donna Ertel, 58, of Fairfield, said she is a Democrat who supports affordable housing — but not in the form of the proposals before the General Assembly.

“We’ve chosen to have single-family homes, and we’ve all worked hard for that,” she said. “And for someone to come in and make blanket statements about how to impose affordable housing in our towns, I think is wrong.”

Hoisting signs that read “Stop the Democrat Power Grab” and “Zoning: One Size Does Not Fit All,” many of the assembled homeowners argued that the bills would undermine local decision-making and alter the spirit of small towns. Some raised concerns about multifamily homes putting undue strains on town water and sewer systems. Others said that legislators should look toward other solutions — like improving the housing stock in Connecticut’s cities or converting unused retail property into housing units — before calling on small towns to shoulder the responsibility of developing affordable housing units.

As speakers took to the steps of the Old Town Hall, a lone protester walked up and down Old Post Road, yelling “Hartford go home!” at passing cars.

Asked about the argument, made by many proponents of the affordable housing bills, that zoning reform is needed to address racial segregation in Connecticut, Fiorello responded that race-based housing discrimination was a part of America’s past — but is not part of its present.

“Our laws say you cannot discriminate on housing,” she said. “There may be segregation, but people are free to move wherever they want. It’s a question of affordability. There are all skin tones that cannot afford to live in many, many towns.”

As he closed his remarks, West Haven Planning and Zoning Commissioner Steven R. Mullins, a Republican, painted a dire picture for the gathered crowd.

“Right now, this moment, we’re talking about planning and zoning and the possibility of Hartford taking away our home rule rights,” Mullins said. “What are they thinking of taking away from us tomorrow?”

Eliza Fawcett can be reached at elfawcett@courant.com.