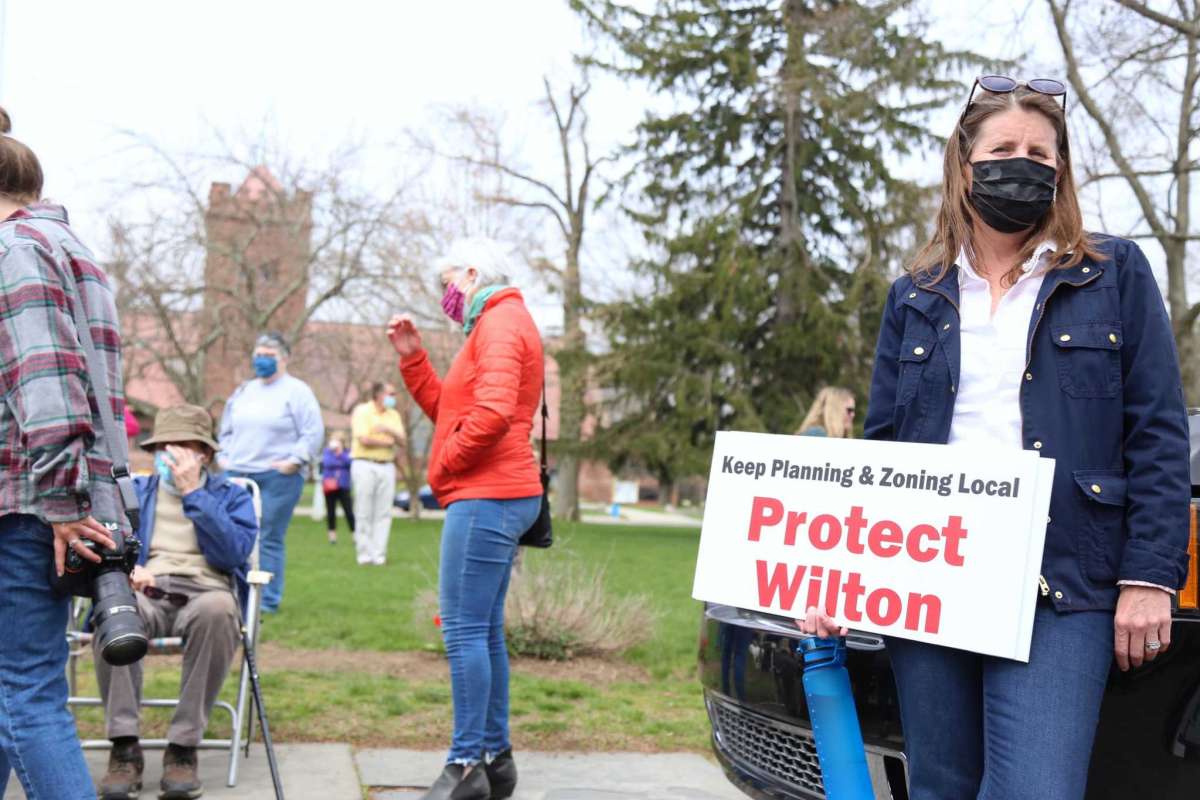 FAIRFIELD — A rally Saturday afternoon gave people a chance to voice their opposition to a range of zoning-related bills under consideration in Hartford.

While they collectively noted that they were in favor of diverse and affordable housing, officials — including First Selectwoman Brenda Kupchick — said the current wave of bills working their way through the legislature were not the right way to augment change.

“We want control over our own community,” Kupchick said.

Referencing her time in the state house, she noted that bills traditionally are debated and discussed over a long period of time, but said some of these have been passed quickly through different committees on their way to full house and senate votes.

She called the bills “fairly frightening.”

“These are important issues that our community needs to discuss at length and all stakeholders need to be at the table,” Kupchick said.

Close to 50 people attended the rally, many from other Fairfield County towns, some carrying signs advocating local zoning control.

Among them was Dana Benson, of Easton, who stood along Old Post Road with his sign yelling a range of slogans to passing cars, including “Hartford go home; Leave Fairfield County alone,” “Will Haskell, you rascal,” and “Lamont, move to Vermont!”

“The idea that Hartford knows better than town leaders, conservation leaders and planning and zoning leaders is a false premise that I could never support,” said state Sen. Tony Hwang, R-Fairfield.

“We need to create affordable, diverse and accessible housing,” he said.

He said the solution from the other side of the aisle appears to be looking at suburban municipalities as the scapegoat for the problem.

“I’m not saying we should stay with the status quo,” he said, but added more options need closer examination, including the role of rural areas and the cities in hosting additional housing.

“I don’t believe that Hartford should have anything to do with where affordable housing goes in particular,” said Rose Corr, a Fairfield resident who came to hear more about the issue.

“They have no idea what we have and what we need, and I think our representative who’s in charge of it is not really representing the majority of our town,” Corr said, referencing state Rep. Cristin McCarthy Vahey, D-Fairfield, who chairs the Planning and Development Committee.

One of a dozen bills that CT 169 Strong is particularly opposed to is S.B. No. 1024, “An Act Concerning Zoning Authority, Certain Design Guidelines, Qualifications of Certain Land Use Officials and Certain Sewage Disposal Systems.” It was drafted by a coalition group called Desegregate Connecticut, which is seeking racial and economic desegregation through expanded housing diversity.

“I think there are probably good intentions here, but bad policy isn’t an excuse,” said Alexis Harrison, a member of Fairfield’s Board of Assessment Appeals, who organized the rally.

“I think a statewide takeover of local zoning is an absolute abuse of power,” she said. “Someone from Hartford should not be telling us how to make a decision about our land.”

Harrison said all of the dozen or so bills being considered aim to take away some degree of local control over zoning.

“They’re telling us our land laws are broken and I beg to differ,” she said.

Speakers at Saturday’s rally included Patrick Sasser, an activist from Stamford who was involved in the battle against tollbooths, and Steven Mullins, a planning and zoning commissioner from West Haven.

“This is important,” Mullins said. “This is an example of fighting for local home rule and not being dictated to by a legislature in Hartford.”

“We can’t have blanket zoning regulations to cover 169 towns and cities,” he said.