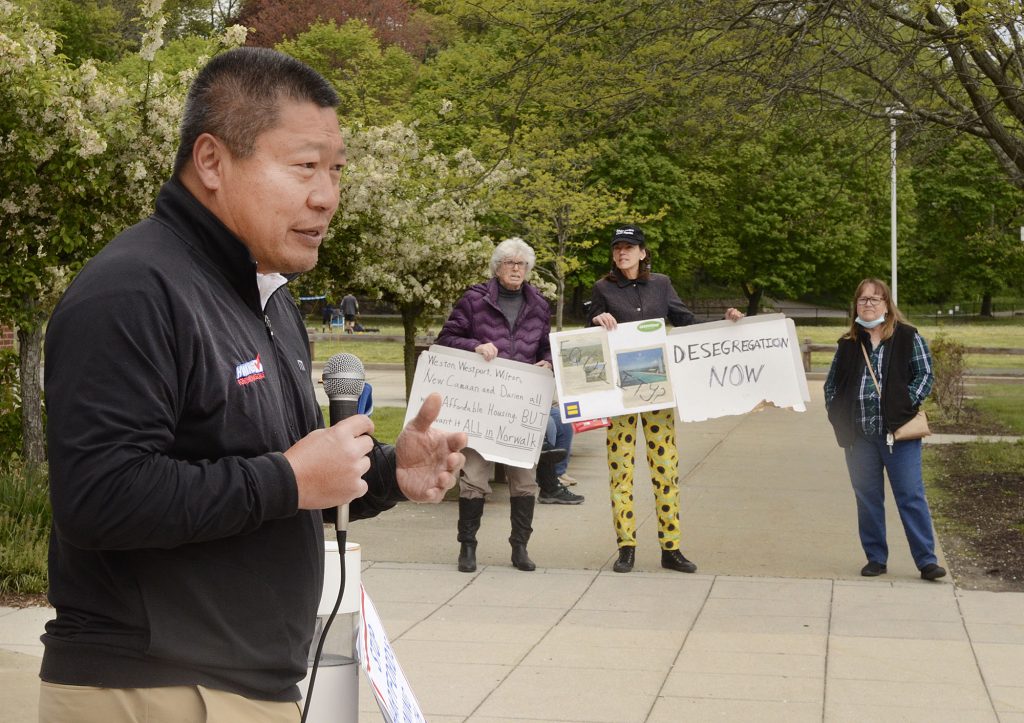 NORWALK, Conn. — Norwalk is not a metropolis, it’s a collection of neighborhoods, and it’s possible that there’s too much building is underway, acting Norwalk Republican Town Committee Chairman Fred Wilms said Saturday, warning that some bills currently making their way through the legislature would put the construction “on steroids.”

“The bills that we are contemplating in the Connecticut General Assembly… are bills that take a look at one size fits all,” State Sen. Tony Hwang (R-28) said at a rally held at Norwalk City Hall. The Norwalk RTC had invited CT169Strong.org, a group organized to oppose an assortment of Zoning laws being contemplated by the legislature, to hold the “Hands Off our Zoning” event, he explained.

“We are criss-crossing our state to spread the message on the importance of citizens being engaged, and being assertive of our property rights of you know the right to have a voice in your local community,” State Rep. Rep. Kim Fiorello (R-Greenwich) said.

The Norwalk Zoning Commission discussed the proposed State bills April 21. Planning and Zoning Director Steven Kleppin said S.B. 1024 “had been watered down” and much of the “bad… advocacy” language removed. “The one other bill that was really troubling,” H.B. 804, was no longer active.

S.B. 1024 was created on recommendations from Desegregate CT, said Alexis Harrison, a Fairfield resident active in opposing the potential legislation.

Phillip Ballestiere of Stamford, who has Norwalk roots, discusses issues with Norwalker Diane Keefe at a “Hands Off Our Zoning” rally Saturday in Norwalk.

Then there’s H.B. 6611. In an effort to respect local control — but not allow towns to ignore their obligations under the Federal Fair Housing laws — H.B. 6611 would leave it entirely up to municipalities to determine how to provide their so-called “fair share” of affordable housing but would attach strict enforcement mechanisms if a town’s plan or implementation is not ambitious enough. The fair share would be determined after a housing-needs assessment is completed and overseen by the state. After that, each town would be required to provide a specific number of affordable housing units to meet that need.

Kleppin referred to “far flung” concepts in that bill. He hadn’t done any work on that one yet, he said.

The bills seek to remedy the high housing costs and the segregation that festers between poor and tony municipalities, tackling exclusionary zoning practices that inhibit developers from building more affordable housing and block the people who need it from moving into their communities.

Compared to other states, Connecticut comes in 49th place for building housing.

S.B. 1024 would have allowed the construction of multi-family developments close to a town’s main train station and two-, three-, and four-unit developments in the downtown corridor — without a developer first needing to go through a public hearing and winning approval from the local planning and zoning board, before it was gutted in a March 31 hearing.

Hwang, at Saturday’s rally, said, “You may hear that from people saying, ‘well, this bill is not going to go forward, this bill is dead.’ Let me assure you until the end of session on June 2 midnight, every single bill is alive.”

He said, “We have two dummy bills in the planning Development Committee, that is exactly that. It has nothing in it. And at any time, language to be inserted in and passed in the dark of night. That will irreversibly change communities.”

Hwang and other speakers at the Republican rally decried the State level effort to mandate local laws.

said. “There are ways to address it. There are lots of proposals out there that can address affordable housing without this incredibly top-down heavy-handed government.”

“It’s about who controls, who decides,” said Wilms, former District 142 State Representative. “We do a much better job of deciding for ourselves then a Hartford bureaucrat, a judge, or somebody outside of Norwalk. So keep it local, keep local control, Norwalk control over Norwalk.”

“Zoning reform will expand our state’s housing stock and diversity, attract new residents to Connecticut, and give our economy a much-needed boost as we recover from COVID-19,” State Senate Majority Leader Bob Duff (D-25) is quoted as saying in a DesegrateCT press release. “Contrary to over-the-top rhetoric from some, these commonsense proposals respect local authority and will receive the full attention of the State Senate.”

S.B. 1024 was developed with the technical expertise of planners and zoning enforcement officials serving towns all over the state, he’s quoted as saying in the Darien Times.

A Duff representative “indicated there wasn’t any immediate action on any of these bills, that they thought there was several more months of vetting that was going to occur before any of this was realized,” Kleppin said April 21.

“Unfortunately, right now… there are far too many bills being proposed by the mandate of one-party rule, by a philosophical point of a mass majority, that does not incorporate difference of opinion, difference of perspective,” Hwang said Saturday. “…Your voices need to be heard in Hartford.”