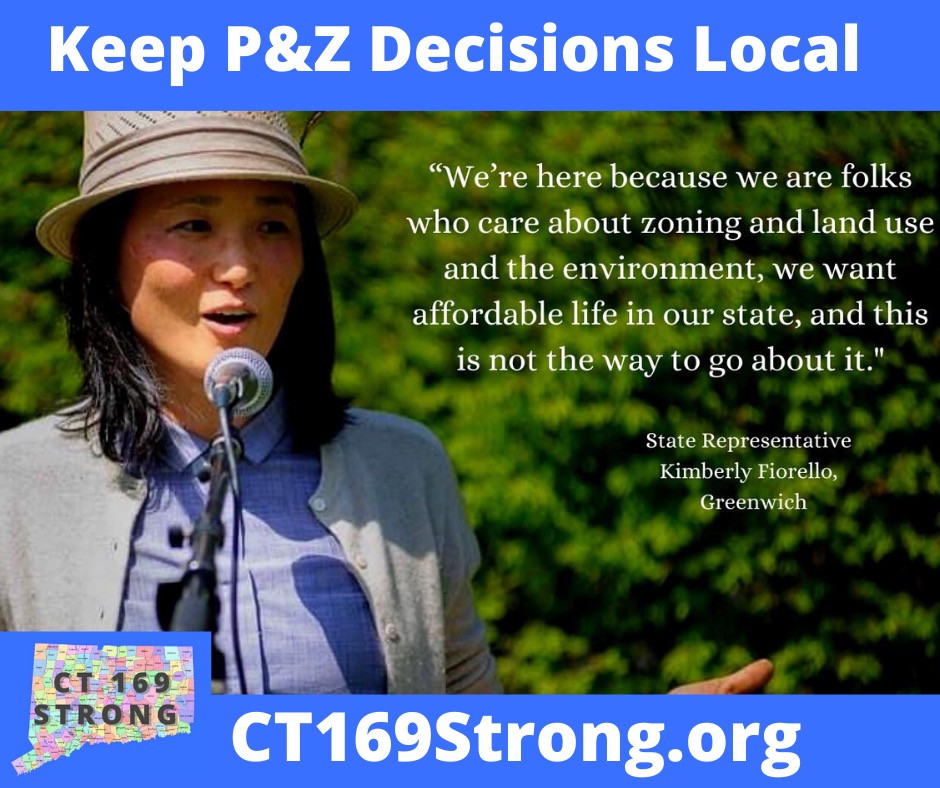 Baseless claims that local zoning decisions are being made in order to keep Connecticut towns racially segregated continue to drive the latest spate of heavy-handed zoning bills pending in the General Assembly. This offensive insinuation is a blunt tool being used by activists to demand that virtually all towns dramatically increase the density of their housing. Real estate developers are seizing this moment, when towns are under attack by housing activists, to try to build, build, build. In places like Greenwich, this means, demolish, demolish, demolish.

With each over-sized, multi-unit luxury apartment complex proposed by developers using state statute 8-30g, more century-old homes and buildings (many of which provide housing for lower- and middle-income residents) are at risk of being demolished. 8-30g allows builders to, in effect, ignore local zoning regulations governing height, lot coverage, setbacks, and the impact on neighboring property values of their projects as long as 30% of the developers’ units are “affordable” as in government subsidized and deed-restricted. 8-30g also puts the burden on zoning commissions to justify denials of applications, making it that much easier for builders to build what they wish.

What’s more, last year the legislature passed a bill that struck down use of the word “character” in consideration of local zoning decisions. State Senate President Pro Tempore Martin Looney said at the time that, “character” is “shorthand for white and wealthy.” In the face of such a charged attack, it is hard to know what to do.

For those Greenwich residents who want to do something but aren’t sure it’s worth the fight to risk being labeled ugly epithets, perhaps, the clarity of a simple question can show the way: does beauty matter?

The Fourth Ward Historic District is one of Greenwich’s most cherished neighborhoods. It was once the center of an African American enclave where one of only two African American churches in town is still located, as well as home to the town’s early Irish population, where it’s first Roman Catholic Church and cemetery were established.

Nine buildings in the Fourth Ward Historic District that contributed to the neighborhood being listed on the National Register of Historic Places in 2000 – homes on Church Street, Sherwood Place and Putnam Court – are now at risk of being torn down and gobbled up by a monstrous seven-story, 192 apartment complex with underground parking for 288 spaces and amenities such as a pool, lounge, fitness center, and rooftop recreational area.

The Fourth Ward’s application to the National Register describes 39 Church Street as “19th Century vernacular, built in 1889.” 43 Church Street is the “Samuel A. Moshier House, Italianate, built in 1884.” And, 47 Church Street is “Second Empire, built in 1884.” Under 8-30g, their historic significance does not matter. Still, the unique roof lines, interesting architectural details here and there, painted shutters on the windows, front porches for hanging out and space for sky in between and above the houses does matter to the neighbors.

A local resident I bumped into while taking a walk on Church Street said to me, “These houses tell you how our great-grandparents and grandparents lived.” Tears came to her eyes, as she said, imploringly, “Greenwich is a town, not a city.”

Nearby off of Greenwich Avenue behind St. Mary’s Church is a mews-like neighborhood of small dwellings originally carriage houses and garages built in the early 1900s. Twelve of these are slated to be demolished to make room for a six-story 110-unit apartment complex, plans for which were submitted to the planning commission as an 8-30g project.

To be sure, discovering these tiny houses along Benedict Court and Benedict Place are a delight for anyone strolling in the neighborhood. Their human-sized proportions and modest scale feel restful to the soul.

Not surprisingly many old houses near Greenwich Avenue are finding new uses and being repurposed as places to set up businesses that include a law firm, a realtor, a bank, a bakery, and more. The scale and form of these old structures are inviting to people and many of us want to be in the spaces they offer. Will the same be said a century from now when these mega-monolithic apartment complexes are old? Will a future generation find calm and peace in these block-wide, block-high edifices?

I would like to suggest that perhaps our town is at a tipping point where it could lose its identity. Every demolition of a century-old building and the prompt raising up a mega luxury-cum-affordable complex is a kind of unmooring of ourselves from our history. If we ignore this, we will find ourselves in a spiritual desert. Again, the question is: does beauty matter?

There are three fronts upon which we can take action: (1) legislatively, as politicians in Hartford work to change the laws; (2) grassroots-wise, as the public becomes informed and engaged on the issue; and (3) legally, as attorneys invoke state laws to protect historic structures and to seek injunctive relief.

S.B. 169, An Act Concerning A Study Of The Effects Of Affordable Housing Policies In The State, is a one-paged bill to mandate the Commissioner of Housing to “conduct a study of the affordable housing policies, as set for in section 8-30g of the general statutes, and the effects of such policies in the state.” The fact that this bill was even raised is an acknowledgement from politicians in Hartford that they know 8-30g is a problem. But we must stay vigilant as to what remedies to 8-30g the majority party will come up with.

Right now, the Greenwich Representative Town Meeting is considering a Sense of the Meeting Resolution, a non-binding declaration that 8-30g is a flawed law and that it must be fixed. The SOMR was brought up by citizens who drafted it and gathered signatures to support it. How the RTM votes will send a clear signal to those in power what is the will of the people of Greenwich.

And a new group called the Greenwich Preservation Network is sponsoring an online petition to oppose the demolition of the houses in the Fourth Ward Historic District. You can find a link to the petition at the Greenwich Historical Society’s website, www.greenwichhistory.org.

On the legal front, however, little to no action is taking place. And yet, this is as vital a tool as any that should be used. We need the town executive or a group of regular citizens to explore the use of state statutes 22a-19a “Historic Structures and landmarks” and 22a-16 “Action for declaratory and equitable relief against unreasonable pollution,” which may legislate historic structures and landmarks being protected by the public trust.

And not to be overlooked is the opinion in Connecticut Historical Commission vs Wallingford (2011) in which the court wrote “the statue extends the protections afforded by the Connecticut Environmental Protection Act (CEPA), which encompasses the aforementioned sections, to historic structures, landmarks, and contributing structures. Under CEPA, there is a public trust in state resources and it is within the public interest to prevent such resources from unreasonable destruction.”

Love of our town and wanting to protect it from obliteration for profit by developers having the advantage of a special interest law like 8-30g is harkening to the spiritual connection human beings have to our understanding of home. Winding roads, stone walls, steepled churches and grave yards, century-old homes that represent New England. Beauty matters. Stop 8-30g.